“Older than dirt,” he says when I ask his age. He’s still ¨galavanting around” as he says, and has over 200,000 miles on his Subaru. Most recently he’s been taking day trips to various places for his work with Robert Julyan on the next edition of “The Place Names of New Mexico.

Jerry Widdison is the TACA board member with the longest residency in Albuquerque – 75 years by his estimation. He came here with his family from Salt Lake City during the war and attended  Monte Vista Elementary, Washington Junior High School, and Highland High School. He got a geography degree at UNM in 1956, graduating with distinction. Third in his class of 800, he remembers. Then he went to the University of Boulder and got his Masters in geography.

He said his first real job was in 1964 in Albuquerque’s Planning Department, where he had done windshield land use surveys during college. He befriended architect Joe McKinney and they later both got jobs at Chambers Campbell Architecture, later CCIC. He worked there for 14 years, longer than anyone else employed by the firm. He returned to City of Albuquerque employment in 1982 and retired from the Public Works Department in 2001.

I’ve gone on several picnics with Jerry in the last couple of years. The following are journal entries from cocoposts.typepad.com.

He has an encyclopedic knowledge of New Mexico’s old roads and routes, mines and settlements, people and events –  the stuff of the west, collected over a lifetime of keen interest and study.  In the spirit of, “I haven’t been out that way in a while,” he‘ll go anywhere, and has been everywhere

We were standing near the center of the ruin as he recalled visiting Paa-ko as a boy. It’s marked as a The State Historic Monument on the old road maps. He said there was a full-time caretaker who lived right there. It was a two-room stone house. One room was the museum – a cracked-glass cabinet of arrowheads and broken pots, and a guest book. The other room was the caretaker’s living quarters where he heated and cooked on a wood stove and slept on a single cot.

We loaded lunch into my old civic sleigh and headed out from Albuquerque through Tijeras Canyon and then south toward the mission sites in Salinas Pueblo Missions National Monument.

Both of us being veterans of remote New Mexico travel we over-prepared. There was hot cider in the thermos, tea, water, peanut butter and honey sandwiches, avocado and cheese on bread, apple slices in lemon juice and cinnamon, and some incredibly sweet little cookies that Jerry enjoyed to the near exclusion of the rest of it.

We ate at a sunny picnic table next to the visitor center at Quarai. Then, well-fortified, we set out to explore the ruins with the guidebook. It was a very fair winter day and there were a few others, including several Germans, marveling at the place.

We spent too much time in the visitor center chatting with the ranger and staring at the scale model of the pueblo, itself an antique. We went through all the artifacts, books and maps. Jerry often finds himself or his work mentioned in an index or bibliography.

The warmth of the day belied its length. We headed back, stopping for a long freight train to cross 47. We’ll go again soon, we say. I’ll chronicle more trips in future.

Posted in Board Members | Tagged Paa-ko | Leave a comment

Posted on September 19, 2020 by cocolaboca
Posted in ABQ Images | Leave a comment

The Neon Park and the Garcia Collection

The lovely old  Glorieta Brewery Building between Lomas, the railroad tracks and John Street, in downtown Albuquerque is being restored and promises to be the crowning glory of the Garcia collection. It’s part of an 8 acre complex recently purchased by the Garcia family where the new Neon Park will shine with nostalgia from the good old days. Cream of the crop, meticulously restored Albuquerque and New Mexican neon treasures will be displayed in an old warehouse across from the brick brewery.

This is the boneyard of the yet to be restored
next phase of the Neon Park’s restoration.

A secret glimpse into the museum’s back room during a 2018 event.

Joe is well known to those of us interested in New Mexico history. His work has informed fellow professionals and introduced newcomers to this regions´ rich multidimensional past.

Joe’s research often addresses the fraught history of the treatment of Native Americans. ¨Olla Bearers and Indian Detours: New Mexico Indians as Tourist Attractions,” was presented most recently to the Taos Historical Society in August. In it he examines how entrepreneurs promoted New Mexico tourism through use of romantic and stereotyped images with “mixed consequences” for natives.

In “Christmas Revels: the 1919 New Mexico Mounted Police Raid on Santo Domingo Pueblo,” he describes a pivotal incident in 1919 that was a “precursor of the united Pueblo’s’ struggle to defeat the Bursum Bill and preserve their lands and way of life in the 1920s.”

Albuquerque Indian School: Origins and Communities is a two-part presentation about the school.

The first explores the cultural, athletic, religious and economic relationships and interactions with the Albuquerque community.  The second is about the history of the school property after its closure.

The historic interplay between the automobile, the built environment, and the community is the theme of several talks. His examination of North Fourth Street traces the evolution and impact of what was once Route 66. Another talk features the emergence and development of auto-oriented lodging in Albuquerque from primitive camp to the motor hotels and lodges.

J.R. Willis: Postcard Artist and Old Town Arts Entrepreneur, is a review of the life and career of this once prominent Old Town artist.

Joe grew up in California and received a B.A. in Political Science and a Masters Degree in Library Science from UCLA. He came to New Mexico first as a VISTA volunteer for libraries in Sandoval County. He worked at the UNM School of Law Library helping to create an American Indian Law Collection and editing the American Indian Law Newsletter. During his tenure with the Albuquerque Bernalillo County Library he was Head of Reference, Head of the Main Library, and Branch Manager of Special Collections.

In addition to his research and speaking events, Joe is generous with his volunteer time and knowledge, working at the Indian Pueblo Cultural Center archives and library, and with the Near North Valley Neighborhood Association. He successfully worked to pass statewide general bond legislation for public libraries in 2002, 2004, 2006, 2008, 2010, 2012, 2014, 2016 and 2018. He has also served as New Mexico Library Association President and was made Honorary Life Member in 2000.

TACA is fortunate to count Joe Sabatini as a board member!

Longtime Board President Ann Carson is a hands-on scholar, preservation proponent, and self-described urban archaeologist. Her work is well known to many in New Mexico.

After moving to Albuquerque with her family in 1985, she became actively involved in the history and archaeology societies, both of which she has served as president. Her historic preservation of four houses (as well as the TACA Preservation Station) in the Huning Highland Historic District, is visible evidence of her commitment to the city and neighborhood. She is involved, and at the heart of, wildly popular home tours and neighborhood events that have enlightened and inspired many.

She developed a keen design aesthetic soon after high school when she moved from Ely, Nevada, to California to study and work in interior design – an interest and skill she still pursues today. She took classes at UCLA and began participating in archaeological digs where, during one such project in Guatemala, she met her husband Jim. After years in Fresno, a city Ann recalls as having many similarities to Albuquerque, “Mid size, good, not glamorous,” they chose Albuquerque as their new home.

She got her art history degree from UNM in 1990 and worked for both the City of Albuquerque and City of Santa Fe on their first architectural surveys. Her involvement with TACA began during survey work on a block of demolished structures on Central Avenue SE. Her generous support of the organization has enabled TACA to sustain the Preservation Station and its community garden as a neighborhood resource and gathering place.

Ann’s support for, and extensive knowledge of, Albuquerque and its built environment, arts, architectural history and archaeology were recognized by The Historical Society of New Mexico with her receipt of the Bradford Prince Award for Historic Preservation in 2015.

TACA is honored and extremely fortunate to have Ann Carson as Board President.

Located at the northeast corner of Coal Avenue and Walter Street in the Huning Highlands Historic District, the former Huning Highlands Conoco Service Station is representative of the “House with Bays” subtype of gas station popular in the 1930s. The building presents a cross-gable composition of two steeply pitched gabled service bays intersecting a side-gabled mass. It is constructed of glazed brick laid in a running bond pattern, and sits on a concrete foundation. The steeply pitched roof terminates with bell-cast eaves and exposed rafters. The roofing material is cement-asbestos shingle simulated as a wood grain. A corbelled brick chimney caps the roof ridge. With the exception of the removal of the gas pumps and the sign, little has changed over the years. The property retains a high degree of integrity as to the location, design, materials, workmanship and feeling of a service station during its period of significance.

As discussed in the Auto-oriented Commercial Development in Albuquerque, New Mexico, 1916-1956, the automobile played a primary role in Albuquerque’s physical and commercial development. Albuquerque historically grew along a north-south axis following the Rio Grande. Early Spanish settlement along the Camino Real was followed by the Santa Fe Railroad in 1880 and New Mexico’s first highway, NM 1, in the early teens. By the time the Continental Oil Company constructed the Huning Highlands Conoco Service Station in 1937, the city had begun to grow around a grid of primary and secondary automobile arterials. The construction of the Huning Highlands Conoco Station coincided with the realignment of U.S. 66 from the north-south Fourth Street corridor to its new east-west alignment along Central Avenue. Coal Avenue, a long thoroughfare linking the Huning Highlands to downtown Albuquerque, evolved as a prominent arterial during the 1930s, becoming an alternative route to busy U.S. 66.
With the construction of a viaduct over the Atchison, Topeka & Santa Fe Railway tracks in 1900, Coal Avenue emerged as a major east-west arterial, linking downtown Albuquerque with the newly developing East Mesa suburbs. As a result, Coal Avenue stimulated growth on both sides of the Rio Grande and figured prominently as a major arterial on city maps. 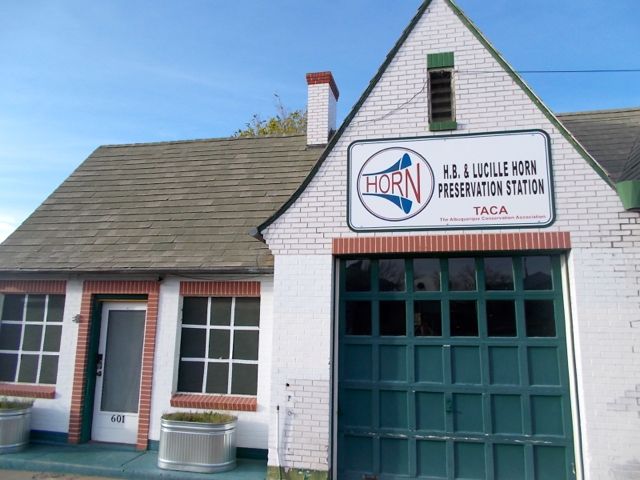 In the early 1930s, Edward and Ellen Lembke, who owned the home at 416 Walter Avenue (abutting the nominated property), owned the land on which the service station is located. Before 1936, the vacant lot served as a storage area for the Lembke Construction Co. In 1936 Lembke sold the property to Continental Oil Company (Conoco). Conoco, which strived in the 1930s to expand its territory in the Rocky Mountain states and into the Southwest, had already opened 16 service stations in Albuquerque (New Mexico Conoco Travel Guide 1933). An article in a 1937 Albuquerque Progress magazine documented the construction of the gas station and provides a photograph of how it first appeared.

Historian and TACA board member Joe Sabatini talks about the history and fate of the old Albuquerque Indian School in this video from his 2018 talk at the Albuquerque Special Collections Library: https://youtu.be/_YjwzAptqfI

TACA board member Joe Sabatini will give a talk during the “Alternative Spring Break” week at the Cherry Hills Library, 6901 Barstow NE in Albuquerque www.abclibrary.org